Blue Light not only harmful to the eye but the entire body. 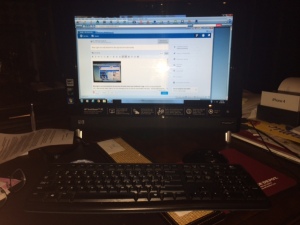 Ophthalmic Blue Guard lenses are the biggest technological marvel of the century!

Blue light is not only harmful to the eyes but the entire body says Dr Michael Lange. Science is now proving that HIV ( High intensity visible ) light is  the most damaging to the eye and the entire health of the body.  The Blue light being the most damaging of the HIV spectrum.   Blue light is  being emitted more and more in the modern homes and work place. The harmful range of blue light is in the range from about 400 nm – 460 nm.  We are all using  computers, lap tops,  I pads,  Smart Phones, TVs and are exposed to LED and flourescent lighting that all omit high levels of Blue light. Blue light is harmful because it emits the highest amount of energy of the visible light.   This blue light is able to penetrate deep into the eye damaging the lens and the retina.  Blue light also gives off an extreme amount of glare and causes significant eye strain. Blue light may even cause some systemic health conditions.  Studies indicate that exposure to blue light  in the evening will cause the pineal gland to suppress the production of melatonin and delay deep REM phase of sleep significantly.  Sleep impairment and cause cortisol and inflammation to rise in the body. The rise in cortisol and inflammation can trigger many other diseases.  New research also  correlates the decline in melatonin with an increased risk of many types of cancers. So one step in the anti aging direction would be to minimize your exposure to all of the devices emitting blue light!  However this may be very difficult for the majority of us to do, so what would be the next best option? Dr Michael Lange of Lange Eye Care and associates says many companies now manufacture blue filtering lenses that claim to filter much of the harmful blue light.  These lenses usually have some form of a tint that is either yellow, orange, amber or may have a purple hue.  Many of these lenses are quite good at filtering some of the blue light however  many people find the color of the lenses to be cosmetically un appealing.  Dr Lange was one of the first in the country to recommend these new generation blue filtering lenses and has been custom making  blue blocking sunglasses in his own labs for 20 years. In November of 2014 Dr Lange was introduced to a new monomer that filters the majority of the blue light and is totally clear!!  Dr Lange states this blue filtering technology in a clear lens is one of the most exciting lens technology advancements to hit the industry.   Dr Lange is recommending this  new lens technology to everyone at any age and he calls it opthalmic Blue Guard. Dr Lange states  we now have technology that we can recommend to our patients that may positively impact their future!!   If we can prescribe a lens that filters out the blue light and as a result may help to reduce the decline in melatonin production and  may prove to improve sleep and reduce  certain cancers , WOW!  This will become the fastest growing part of the optical industry is Dr Lange’s prediction. Dr Michael Lange has been hosting a popular radio talk show called “Ask the Dr” since April of 1994 non stop and one of his hottest subjects over the last year has been  blue light and the potential danger of blue light. It is up to the individual eye doctors to educate their patients and make recommendations for these new blue filtering lenses. This should be a part of anti aging and wellness that all doctors should incorporate in their plans.  Ask you optometrist or ophthalmologist about blue filtering lenses for everyone in your family. Ophthalmic Blue Guard is available through all Lange Eye Care locations in Florida.  learn more about Lange Eye Care at  http://www.langeeyecare.com you can purchase non prescription Blue Guard lenses and frame combo for kids and adults  now for the first time as of  7/11/2015 from : http://www.fortifeye.com/category/ophthalmic-blue-guard-lenses/